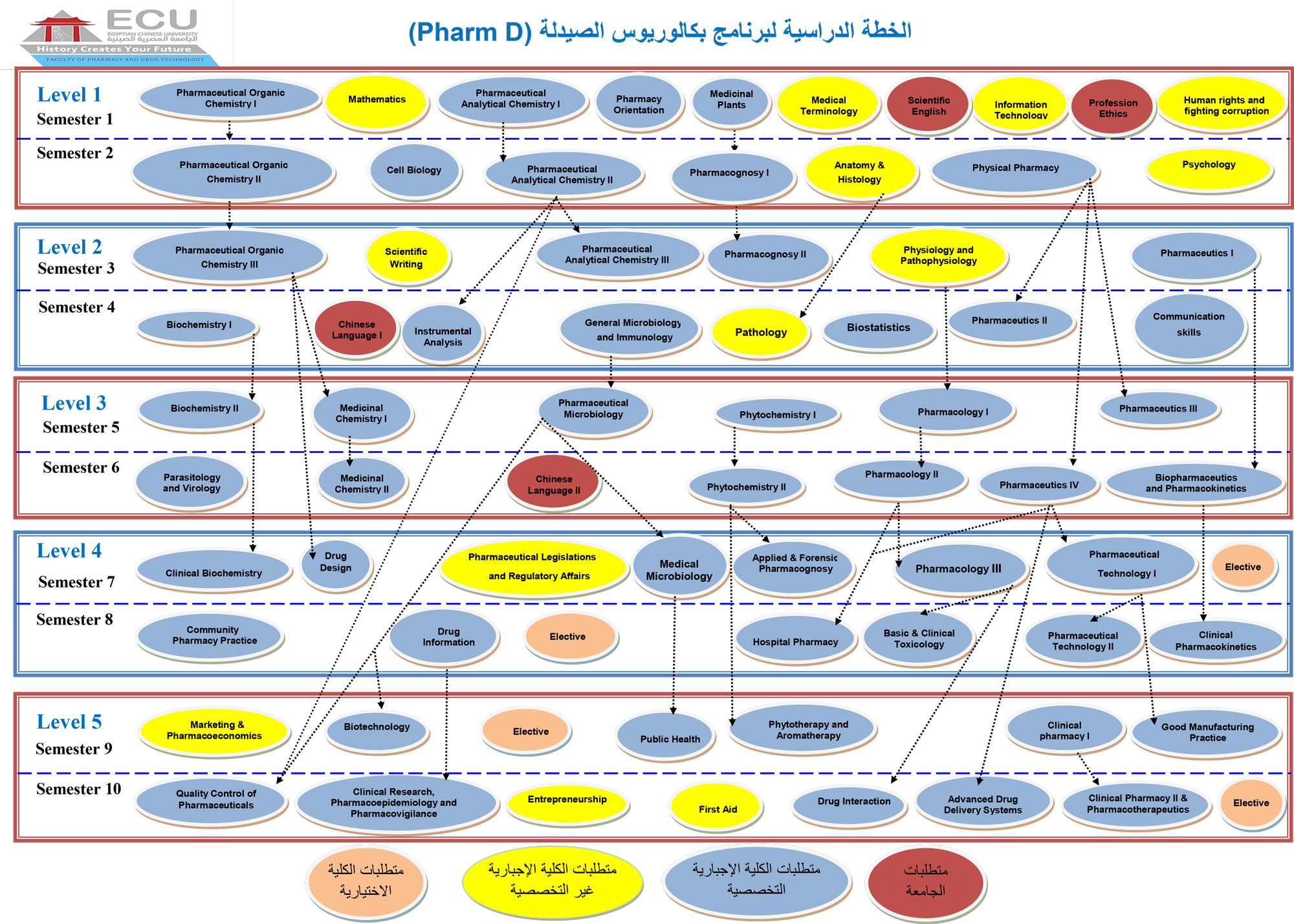 The Egyptian Chinese University awards its graduate, at the recommendation of the Faculty Council after successful completion of the approved study program, the degree of Bachelor of Pharmacy (Pharm D) according to the credit hours’ system. This is the first university degree in the field of pharmacy that is required to obtain work authorization to practice the jobs in different fields of pharmacy. Also, this degree qualifies the graduate to register in master’s degree in any of the specialties of the Faculty departments.

The study is carried on according to the credit hours’ system. A “CREDIT HOUR” is the unit of measuring educational CREDIT, usually based on the number of classroom hours per week throughout a term.

The length of the study in the program is five academic years (Five levels in ten academic semesters) according to the credit hours’ system and a year of advanced training (residency) in work places (5+1). In addition to 100 actual hours of field training in community, governmental, and hospital pharmacies during summer vacations after finishing level 3 and before the commence of the residency year.

The English language is the main language of the study in the Faculty. Some course could be studied in Arabic according to the recommendation of the specialized academic department and the approval of the Faculty Council.

The maximum load can be increased for the student who has an excuse that is accepted upon the recommendation of the academic advisor and the approval of the respective department council and the Faculty Council:

The University should provide for the students an appropriate number of credit hours per semester so that they can graduate in 5 years.

Students enrolled in the Faculty are classified into study levels (One, Two, Three, Four, and Five). Each level has Fall, Spring, and Summer (elective) semesters according to the credit hours accomplished by the student. The study during the Fall and Spring semesters is 15 weeks while in the summer semester it is 6-8 weeks of intensive study including the exams. The study level of the student is determined according to the number of hours he has succeeded, as follows.

Student’s evaluation in the course

The student is continuously evaluated during the semester and final grade for each course is the sum of all the grades he obtained in the periodical activities, practical, midterms and final exams. The distribution of the grades for each element is as indicated in the respective tables. The student should get at least 30% of the grade of the final exam, if he gets less, he’ll be considered failed and the grades of the other elements of the course won’t be added to him.